February 3, 2017, Harrisburg, Pa.—With budget season launching, most public discussion will focus on the General Fund budget, which was $31.6 billion last year. But this was just 40 percent of state government’s $78 billion cost. Hidden in the remaining 60 percent—essentially a “shadow budget”—are more than 150 “special funds” whose costs are largely unknown to the public.

Gov. Wolf and lawmakers have committed to reimagining state government, and reining in the shadow budget is one of multiple policy solutions they should implement.

With names like the Keystone Recreation, Park and Conservation Fund and the Agricultural Conservation Easement Purchase Fund, shadow-budget funds have bankrolled pool feasibility studies and golf course acquisitions, subsidized well-paid farmers on the backs of the poor, and funneled additional tax dollars to initiatives already funded through other government means. Also included in these funds is some of the more than $800 million in corporate welfare the state doles out to politically favored businesses.

Worse, these funds are often on autopilot, growing each year without review from elected officials. As a result, Pennsylvania’s total operating budget has climbed 184 percent since 1970—an inflation-adjusted increase of$3,975 per person. 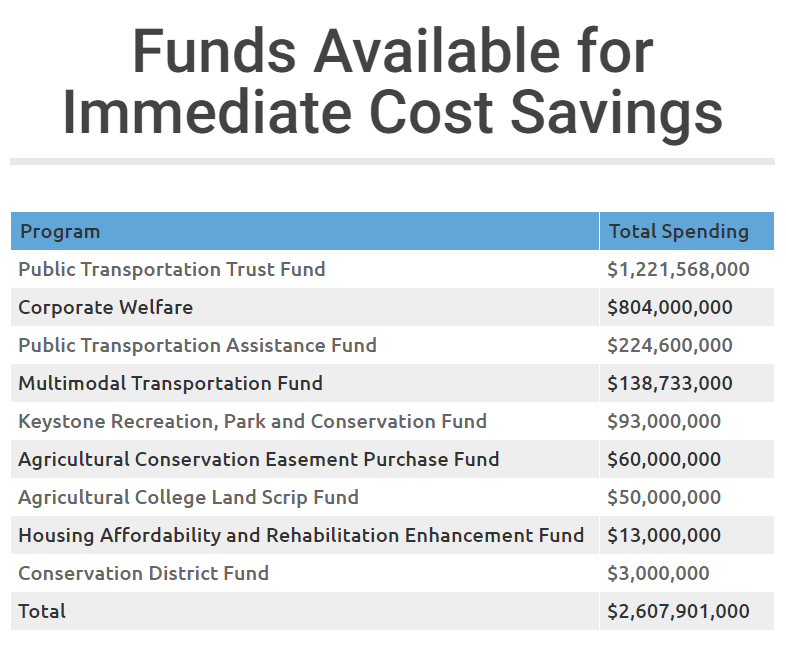 “Every year, Pennsylvanians are forced to fund programs that at best are nonessential; at worst, downright wasteful,” commented Bob Dick, senior policy analyst for the Commonwealth Foundation. “If lawmakers and Gov. Wolf reduce this questionable spending by half, they could save approximately $1.3 billion—well over half of next year’s projected $2 billion budget shortfall. It’s time to bring the shadow budget to light and prevent it from taking more each year from hardworking Pennsylvanians.”