One-Third of Pa. Residents Want Out

February 17, 2016, HARRISBURG, Pa.—One-third of Pennsylvanians would rather move to another state than stay in the commonwealth, and taxes are a major reason. Last year, thousands acted on this impulse: One person left the Keystone State every 12.5 minutes seeking better opportunities in other states.

Residents in states with higher state and local tax burdens are more likely to want to leave than those in lower-tax states, a recent Gallup poll found. In Pennsylvania, this translates to more than three in every 10 residents wanting out.

Unfortunately, Governor Tom Wolf’s plan to squeeze taxpayers even harder will give a whole new definition to “border bleed.”

“Money talks, and money walks,” commented Nathan Benefield, vice president of policy analysis for the Commonwealth Foundation. “As Pennsylvanians look across state lines to more tax-friendly pastures, Gov. Wolf’s ‘solution’ is to increase the tax burden by $850 per family of four. That’s on top of the more than $18,000 in state and local taxes families already shoulder. Wolf might as well rent a moving truck and hand out directions to the interstate.”

In 2015 alone, Pennsylvania lost 41,600 residents to other states in net migration—one person every 12.5 minutes, nearly the entire population of York, Gov. Wolf’s hometown. The economic impact is staggering. 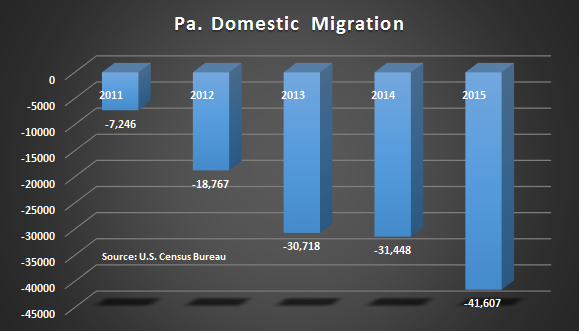 From 1992-2014, the commonwealth lost $11.6 billion per year in adjusted gross income—and more than $350 million annually in state income tax revenue—due to state-to-state migration.

Not surprisingly, states gaining from Pennsylvania’s loss include lower-tax states like Florida, North Carolina, and Delaware. In fact, over the last five years, states with the largest migration losses—including Pennsylvania—had a higher average tax burden (10.93 percent) than states with the most significant migration gains (8.84 percent).

Because Pennsylvania’s population already ranks among the nation’s oldest, this trend is particularly concerning. Demand for government services will only increase in upcoming years. Yet, the “brain drain” spurred by high taxes means the state will lose the very taxpayers who fund these programs.

“Gov. Wolf has promised doomsday if he doesn’t get his way on tax hikes,” Benefield continued, “but his tax policies are driving out people, revenue, and talent critical to our state’s future.

“We don’t want to be the next New York or New Jersey. To halt our transition from Keystone State to exit ramp, the governor and legislators must reject broad-based tax increases and commit to responsible spending that lessens the tax burden on hardworking Pennsylvanians.”

Nathan Benefield and other Commonwealth Foundation experts are available for comment. Please contact Gina Diorio at 862-703-6670 to schedule an interview.