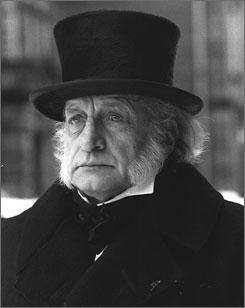 Tony Phyrillas points to a DotPenn article on “Why Scrooge is a Progressive.”

While DotPenn is typically a satire/humor blog, the the lesson of Ebenezer Scrooge is a great one on the difference between government programs, and personal, private charity. A 2007 Freeman article highlights this points nicely:

The treadmill, poor law, and union workhouses to which Scrooge refers were all punitive government ways of either helping the poor or of giving the poor an incentive not to be poor. So, for example, anyone finding himself in poverty could enter a workhouse where he would work hard and receive some small amount of food in return. The two men who ask Scrooge for aid are not asking for higher amounts of food to be handed out by government agencies. Instead, they are asking for private, voluntary charity to those they deem worthy.

After turning them down, Scrooge goes home and to bed. In the middle of the night he sees, in turn, the ghosts of Christmas past, present, and future. He sees how he has turned gradually from a loving brother into a bitter, stingy old man. He also sees how unmourned he will be in death if he fails to be generous, with himself and others, in life. When Scrooge wakes up, he realizes that indeed he can change. In my favorite scene in the movie, Scrooge dances around in his nightshirt like a kid in a candy store, celebrating his power to change. And what is the change? Does he say, “Oh, boy, now I’ll support a politician who will tax me, as well as other people less rich than me, to help poor people?” Of course not. An author or a movie producer who tried to set up such a scene would have produced a much less compelling novel or movie. Scrooge is excited because now he can change, now he can get pleasure from helping others who are worse off. In other words, the lesson of A Christmas Carol is the importance of being generous, not the importance of supporting higher taxes on oneself and others.

After all, Scrooge seemingly paid his taxes. Isn’t that enough?

Scrooge (and Dickens) has been the subject of other Freeman articles, including: